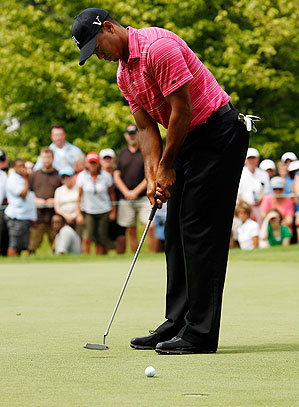 I spoke in my last post about the importance of putting in the game of golf. For someone like me, shooting 70-75, 40% of all shots I hit in a round of golf will be with the flat stick.

How many of us have ever had a putting lesson, or had a putter fitted? Yet we’ll hit thousands of balls in search of the ‘perfect’ swing and pay hundreds of pounds for a driver that promises us another 10 yards off the tee (or further into the trees in my case!).

You want to lower your scores? Have a putting lesson, then  put some hours in on the green. It’s not as sexy as hitting it 300 yards, but it WILL improve your game!

Until this week, I’d only ever had two putting lessons in my life from a PGA pro – albeit that’s probably two more than most amateurs. But in my second life as a golfer, and coming from a background in cycling, I’m all about the marginal gains these days. And so it was that I found myself in Billy Fyfe‘s putting lab at the Paul Lawrie Golf Centre on Monday morning.

Billy recorded me hitting a dozen putts with the Quintic radar system, which gave us a tonne of data. We also got some video footage of my setup & stroke (is my hair really that grey?).

With this data, Billy was able to identify a few areas for improvement starting off with my setup. This was great, because I hadn’t been feeling comfortable with the putter since I started to play again. With the help of the GEL putting mirror, I now feel much better over the ball and know that it’s a much better setup that will help me stroke the ball better.

After dialing in my setup, Billy then checked my putter loft & lie – it needed tweaked from 68.5 to 69.5 degrees and immediately it felt better. Finally we spoke about my putting stroke – on the video my shoulders were moving a lot, creating an in to out stroke so we’ve changed this to a rocking style and again it feels good.

It’s now about putting some time in on the practice green and also working with the mirror at home to make the changes feel more natural.